In March 2009 I travelled to the Hula Valley in Israel to take part in the ANF project there. The political situation demanded a lot of soul searching on my part before I decided to accept the invitation. Rather than stay in the UK I felt that this was an opportunity that I should be involved with, however ambivalent I felt about the politics of that part of the world. After all nature knows no borders and the trip was set up to highlight the wetlands of the Hula Valley that it such an important oasis for migrating birds. 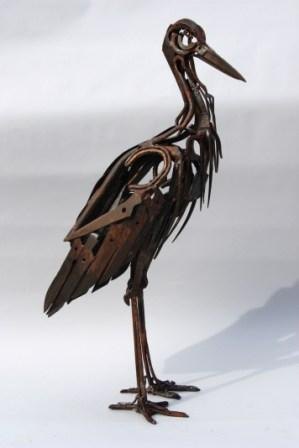 The experience was unforgettable.  Thousands of over wintering cranes and the beginning of the migration into Europe of storks, cranes and raptors was fantastic. The site, in the shadow of the Golan heights could not shrug off its violent history and remnants of that history were never too far away.  With access to a workshop I made two sculptures whilst in Israel.  A crane and a coypu or nutria. Both pieces were made in found objects and like the Great Fen Project I scavenged in the surrounding area.  Inevitably I came across not only pieces with an agricultural history but objects from the military history of the area. 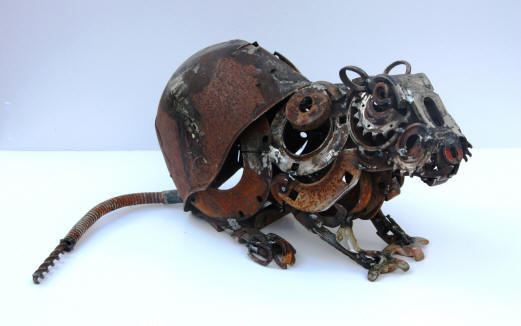 A local farm worker gave me a shattered helmet from the Golan conflict in the sixties and after much thought I felt that it was justifiable to make use of it in my work.  Somehow by making use of the helmet I felt it echoed the way that nature continues despite human conflict-battlefields become flower meadows and rusting tanks nest sites… Back in my UK studio I made a Fork Fronted Stork and a Padlock Crab for the project. 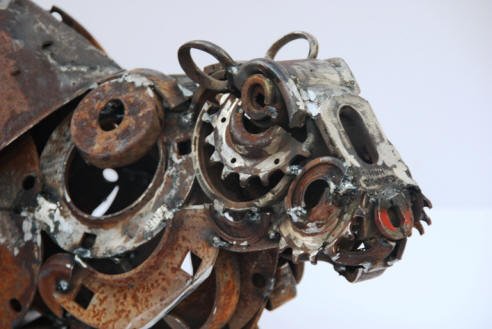