The annual exhibition of the Society of Wildlife Artists runs from 26th October to 6th November. It showcases the very best of art inspired by the natural world and has over 350 pieces by more than 100 artists on display this year. 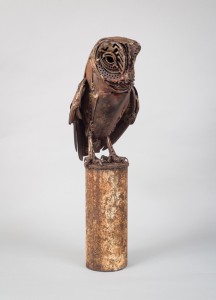 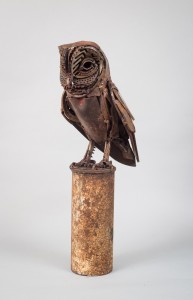 I have worked hard to get 8 pieces made for the exhibition, amongst them is ‘Funnel’ a cuckoo chick being fed by a reed warbler. This sculpture was inspired by a visit to a private nature reserve specifically to observe cuckoo young in warbler nests as part of the SWLA/BTO Flight Lines project. This project looks at the story of our summer migrants. Selected artists spent time with researchers and field biologists from the British Trust for Ornithology and the resulting work will culminate in a book to be published next year. 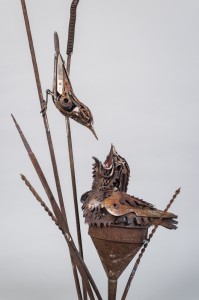 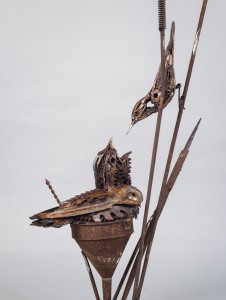 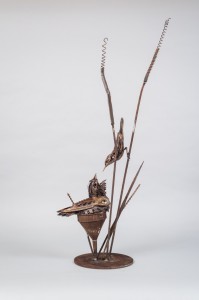 The exhibition is open to the public and well worth a visit. 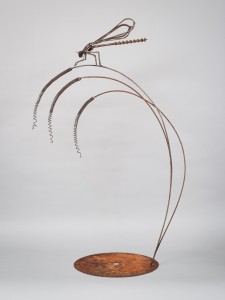 I was lucky enough to see a caracal when I was in South Africa a few years ago so I was really excited when I was asked to make one.

It was very important to get the head right, as I think felines can be especially difficult to capture.  I had a pair of very large split pins that worked well for the eyes and I used pliers, coathooks and  other curving items to get the muzzle and cheekbones. I used steel cable for the characteristic tufts on the ears and bow saw blades for other fur-like texture in places. The legs and paws used up a very large number of bull-nosed and other types of pliers as they helped define the toes. I was very pleased with the movement in the piece and was careful to get the overall balance so that the front paw is just off the ground. The power in the hindquarters and shoulders are conveyed with large items such as horseshoes, clamps and spanners. On one side I even managed to incorporate a large bolt from a door.

I am very grateful to my clients for allowing me to borrow the piece back so that it can be shown at The Natural Eye, the annual exhibition of the Society of Wildlife Artists which is at the Mall Galleries from Thursday 30 October until Sunday 9th November 2014. I was thinking of subjects for sculptures for The Natural Eye, the annual exhibition of The Society of Wildlife Artists at the Mall Galleries in London, and decided that it would be fun to try and make a red squirrel. I tried to make the piece life size but it ended up a little too large. Despite my best efforts most pieces end up about 15 or 20 percent bigger than I intend. I think it is a combination of working with found objects and working in 3D. If I was using a malleable material such as plaster or clay I could remove or add volume fairly easily. With found objects I like to try and show as much of the shape of the original tool as possible and hesitate to grind volume away and ‘muddy’ the shapes. The head has a variety of tiny spanners in it and the ears are made of a large wingnut that I cut in half and dinner forks with steel cable for the tufts. Although it is a bit obvious to use colour in the piece, I think it helps to show it is a red squirrel and not the larger grey. The bulk of the red comes from an old hand drill and a canterbury hoe along with a couple of pairs of pliers that had red handles. In addition I found a coat hook that I brought back from Sark with layers of white paint which was perfect for the white belly. The tail proved a problem until I hit on the idea of using old auger drill bits. There has been a family of green woodpeckers in the horse fields over the summer so it was natural for me to try and make one. As with all smaller creatures it is actually quite tricky to make one in welded found objects. Luckily a green woodpecker is quite a characteristic shape. I don’t often use colour in my sculptures but I had a few red items out in my workshop from making a red squirrel so I had a red combine ‘finger’ and a red canterbury hoe to hand. It helped to confirm the species and I think it works well in this sculpture.

The beak is the make or break of any sculpture of a bird. I had to trawl through my collection of scissors to find just the right sizes for this. Parts of the handles helped with the head and the flanks. One pair even had red handles so I could use them in the head as well. The blades from larger scissors all went into the tails and wings. The lovely shape of the tail, which has very stiff feathers to help the bird balance when clinging to trees, is all scissor blades other than the central feather which is a very old plumb line weight.

This piece will be for sale at The Natural Eye, the annual exhibition of the Society of Wildlife Artists at Mall Galleries London. The show runs from Thursday October 30th until Sunday 9th November 2014.

I made this piece for an exhibition in Stamford called ‘Living on the Edge’ that was a spin off from the New Networks for Nature symposium. The remit of the show was to make work in response to the title. It was a thought provoking show and I made Dog Chain Bittern, Tweezer Nosed Frog, a Roesel’s Bush Cricket and Bilhook Badger. Dog Chain Bittern alluded to the success of conservation efforts to help a particular species by setting up reserves. The Tweezer Nosed Frog was a reference to how the world has got smaller so that wildlife can be exposed to non native flora and fauna and indeed viruses, in this case the choroid virus that has spread through amphibians and is cited as the cause of extinction of at least one South American frog species. The Roesel’s Bush cricket is extending its range in the UK possibly through global warming and by making use of roadside verges. A badger was an obvious choice as being a mammal in the news due to the TB crisis and an example of a species that is at the centre of a massive controversy involving Government, the farming industry, conservation organisations and the public. I made a special effort to use plenty of digging tools in the piece as I enjoyed the fact that badgers are honed digging machines. Here is my second giraffe of the year, Hammer Horned Giraffe. If you look at my post about Hedge Trimmer Giraffe you will know that I started a commission for a 4ft 6 giraffe that rapidly became too big. I put this one aside and made a correctly sized one for my client with the intention of finishing the large one for The Natural Eye, the annual exhibition of the SWLA at the Mall Galleries from 30th October- 10th November. It took an awful lot of work and I was welding right up to the last minute to get the piece ready in time but I am happy with the result. The bulk of the frame is made up of bow saws and long handles from edging shears and other gardening tools. The lower jaw is made of sheep shears and pliers handles plus old mortar trowels for the ears alongside the hammer heads for the horns. All the patterns are made up of blades from combines or other harvesting machines. The tail is made of auger bits. The Wildlife Trusts Undersea Art Award was set up in 2007 thanks to the vision of Peter Tinsley from Dorset WT. Since then 5 artists have been given the opportunity to learn to dive and then make work from the experience of diving off the UK coast. I was lucky enough to be the latest recipient of the award and I had an amazing time seeing marine life up close and in their element off the North Norfolk coast. See my blog about the bursary here.

To celebrate the Undersea Art Award and help highlight the need for Marine Conservation Zones (MCZs) to be designated examples of work from all five artists (Kim Atkinson, Antonia Philips, Anna Kirk-Smith, Esther Tyson and me) is on show at Chesil Beach in Dorset until March 27th. Click here for more information. 127 MCZs were recommended by the stakeholder groups, supported by the MCZ Science Advisory Panel and Natural England, the Government nature conservation advisors. The Government’s current public consultation is proposing to designate this year just 31 of the 127, and it gives no real commitment to designating the remainder. We need a whole network of protected areas as nursery beds for fish and other marine life and 31 sites does not make a network.

The consultation closes at midnight on Easter Sunday, 31st March.
It is easy to respond as the Wildlife Trusts have produced a simple click-and-send campaign response. Click here to support the MCZs.