In 2009 I was elected President of The Society of Wildlife Artists The Society celebrated its 50th anniversary in 2013, so alongside our annual exhibition The Natural Eye at the Mall Galleries in London there was a celebratory show at Nature in Art in Gloucestshire. Over the last fifty years the SWLA has consistently shown some of the very best of art inspired by the natural world at the annual exhibition. In addition to the annual exhibition the SWLA has a range of bursaries. The bursary scheme was set up over twenty years ago and has helped nurture new talent many of which went on to become key members of the Society. I hope to continue to strengthen our bursary portfolio and offer opportunities for artists young and old to take part in projects collaborating with conservation charities in the UK and abroad. The Society’s strength is in our amazing pool of talented artists that celebrate the natural world, a talent which could be used to help conserve the subjects of our inspiration.

In 2011 I was invited to exhibit at The Discerning Eye. This prestigious exhibition celebrates small works and is made up of an open submission and a number of works chosen by that year’s selectors. I chose to exhibit four pieces including Calliper Earwig which was a giant version of a tiny insect and in view of the size limitations seemed rather appropriate. I was astonished to be a joint winner of the DE Founder’s Purchase Prize for the the piece which now resides within the Founder’s collection. In addition my Cog Hare was awarded The Humphreys Purchase Prize. It was a great honour to win both prizes and to know that two of my pieces were chosen to be included in two separate collections.

In 2007 I was thrilled to win the major art prize at the Society of Wildlife Artists Annual Exhibition at the Mall Galleries. The Capmark Europe Art Prize was awarded to the most ‘outstanding work inspired by the natural world’ and was given to my found object sculpture of a Green Sea Turtle.  The piece was inspired by a trip to Borneo the previous year where I was lucky enough to see green sea turtles on the breeding grounds. The starting point for the sculpture was an old tractor seat and it went from there. I was also a runner up the previous year for my found object sculpture of a Pelican. 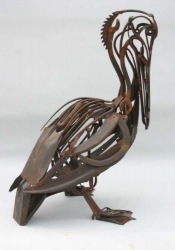 I exhibit every year at the Society of Wildlife Artists annual exhibition at the Mall Galleries. www.swla.co.uk

Work is sometimes available at The Pinkfoot Gallery in Norfolk.